Interview with Dr. Saramati Krishna of Northwest Women’s Clinic in Portland, OR

I had the privilege of speaking with Dr. Saramati Krishna, who is an OB-GYN with Northwest Women’s Clinic. We discussed cultural sensitivity and mental health for pregnant women. 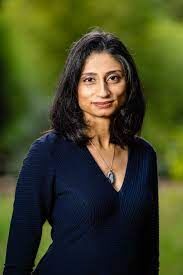 ML: As an OB-GYN who’s fluent in multiple languages, and advocating for mental health through ASHA International, what challenges do you see to a woman’s mental health while she’s pregnant?

SK: I see lots of mental health issues affecting women. Being able to speak multiple languages is a window into the way other people view their mental health and are able to advocate for themselves. My ability to be able to partner with other people is so much better because of communicating in different languages. Sometimes there aren’t even words for some of the things people express. I have to come with an approximation for someone to say something like ‘depression’. In an Indian language, it wouldn’t come out as a direct translation. People may something like ‘my heart is sick’, or ‘I’m feeling heavy or low.’ So to be able to understand what that means and having that window into another culture is very powerful.

SK: Childbirth is a stressful period of time in a lot of people’s lives. I don’t see them resolved very often when the baby is born. Childbirth isn’t a fix. A lot of times, it unmasks things that were under the surface and they come to the front during pregnancy. Fixing them is an ongoing process. If a woman is lucky, she can get started before the baby comes. If you catch it afterwards, she has an opportunity to keep working on it.

ML: Does that become a referral to a mental health professional?

SK: Yes, while I’m able to detect a mental health condition affecting my patients’ health, I’m not the right person to do a detailed evaluation. There’s a lot of nuance and subtlety involved in that. Tailoring the right kind of treatment is a collaboration. I might be the first person suggesting there might be a problem. Sometimes my patient will tell me she thinks something is wrong and ask me. The next step is evaluating what that problem is and partnering with the mental health care provider and the patient. They play a very big role in their own healing. It may be a back and forth, with some nonmedical interventions, some therapeutic talk therapy or alternative lifestyle intervention; it may medication as well. When a pregnancy is involved, there is a third person whose well-being I have to keep in mind, as well.

SK: For sure. Every culture and sub-culture has a different way of talking about these things and what’s safe to talk about. ASHA International started a program called SAFE to help South Asian women, because we saw such high rates of post-partem depression. We started a post-partem support group for a mothers’ circle with some volunteer therapists running it. One of the hardest parts about that was the stigma of being seen with a mental health condition. Showing up in a group of people in their community was a hurdle for a lot of the women. We had to rethink that. We tailored that. Gayathri (founder of ASHA International) told me a story about putting up fliers for some of her educational talks at our temple. Some people came up to her and said they wanted to attend, but they didn’t want to be seen looking at the poster. That’s just an example. The other piece that would be tough is if you’re an immigrant or you’re talking with somebody with a different cultural background or context, sometimes you’re doing the cultural translation at the same time you’re trying to get help for whatever condition is acutely bothering you. That’s a tall order. Sometimes you say what you need to do and get out of there as fast as you can. The stigma of being able to talk about it when you see somebody who looks like you makes it a lot easier to share. It’s the feeling of being alone in a situation is probably universal.

ML: I agree. I’ve seen instances in the media of a child in an impoverished environment who is chained outside because of a behavioral issue. That kind of stigma where the mental illness is not seen as a health condition, but as a superstition is challenging. How do you want a woman to feel and how do you bridge those gaps with a patient?

SK: To approach a person who comes to see me as a collaborator in their care, too. That’s key. Not everybody seeks that from their care provider. But I have a role to play and they do, too. There’s a whole invisible chorus of people who are not sitting there in that room. It could be a partner, or extended family members, experiences they’ve had with their culture. There are all those other invisible things underlying their care as well. Sometimes I’ll know what those are. There are times when it’s not. I’ll have to ask the question. When I have patients who are Orthodox Jewish, I’ll have to ask if something is important to do in a particular way. What are the taboos around menstruation in their culture? It’s OK to ask. To understand that taboos can exist is the first step. The more exposure to other cultures, the better.

ML: What led you to ASHA International?

SK: I was in the audience at the temple when Gayathri Ramprasad was talking about her journey with severe depression. It was sort of an education discourse at our temple and it was crickets in the room. There were some amazing speakers, but there were only a dozen people there, and others trying to disappear. But I recognized a kindred spirit in somebody who saw the problem. I felt like I had that discussion every day in my office around mental health issues. I saw the acute need for somebody who looks like me or talks like me. I went up to her and told her what she had to say was amazing. She asked to be on ASHA’s board and put me to work.

ML: Fantastic! How long ago was that?

SK: I think 2016. One of the things that we had on our list was a list of Southeast Asian mental health providers for referrals. We embarked on that, and a lot of people are positively impacted by that. There are programs that needed to offer cultural education in the hospitals, and we’ve been invited to speak at public forums and hospital diversity, education, and leadership conferences. Some things arose from nurses asking me why do certain patients say or do such-n-such. I’m on both sides, so I’m that bridge; I could formalize it. Since leaving medical school and residency, I’m somebody able to talk about cultural framework and how it influences the ability to provide good care to a patient and get them to comply.

ML: If a doctor in the Portland, Oregon, area wants to be on the list, who do they contact?

SK: ASHA International and ask about the SAFE program. People can reach me through Northwest Women’s Clinic.

ML: Thank you so much for your time.