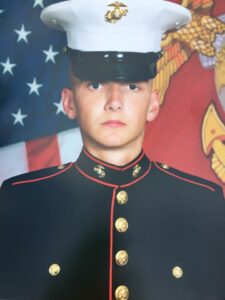 So nobody has to suffer alone.

Austin joined the United States Marine Corps right after graduating high school. Joining the military was something he wanted to do, but the further into his service he got, the more he struggled. His struggles with depression first began when two of his military friends died.

Austin was raised in a loving family. His mom, dad and brother all helped provide a supportive base for him, and when it became clear his pain was too much, they helped fight to get him home.

While trying to learn how to cope with his mental illness, Austin went back to school and work, taking a job at Pepsi, and then moving onto a different job at Intel. He was commuting long hours from Kelso to Hillsboro, and although he was on a strong path, an unexpected tragedy halted that. Another good friend of his died serving. And, Austin didn’t know how to cope with it. The trauma of the losses, in combination with his depression, became too much.

Austin decided he would take his life on Jan. 9, 2018. Just before 5 o’clock that night, he sent out a tweet. ‘Hey, I need somebody to talk to.” A friend saw his tweet, reached out to him, and then his family. And, ended up saving his life. Now, Austin wants to share his story to help de-stigmatize mental health, and advocate for people reaching out to help each other.

My Story My SUPERPOWER Storytelling Show